There must be millions of stories out there. After all, Scheherazade survived a Thousand and One Nights  because of her story-telling skills, and that should account for more or less 1,001 stories. Added to that, there are more or less 8-10,000 movies released every year. There are more or less 2 million books published every year. And this accounts only for the “developed” or more popular parts of the literary world. At this rate, you might begin to imagine there is an absolutely endless treasure of stories that are waiting to be told.

Over the years, there have been many linguists, sociologists, authors, who have worked to prove that there are a limited number of stories around us. That, indeed, there have been only so many stories ever. Chief among the theorists is Kurt Vonnegut with his theory about the Shape of Stories. While the plotlines might be endless, the emotional trajectories that the stories follow are similar. They can be grouped, he says, into a few types: 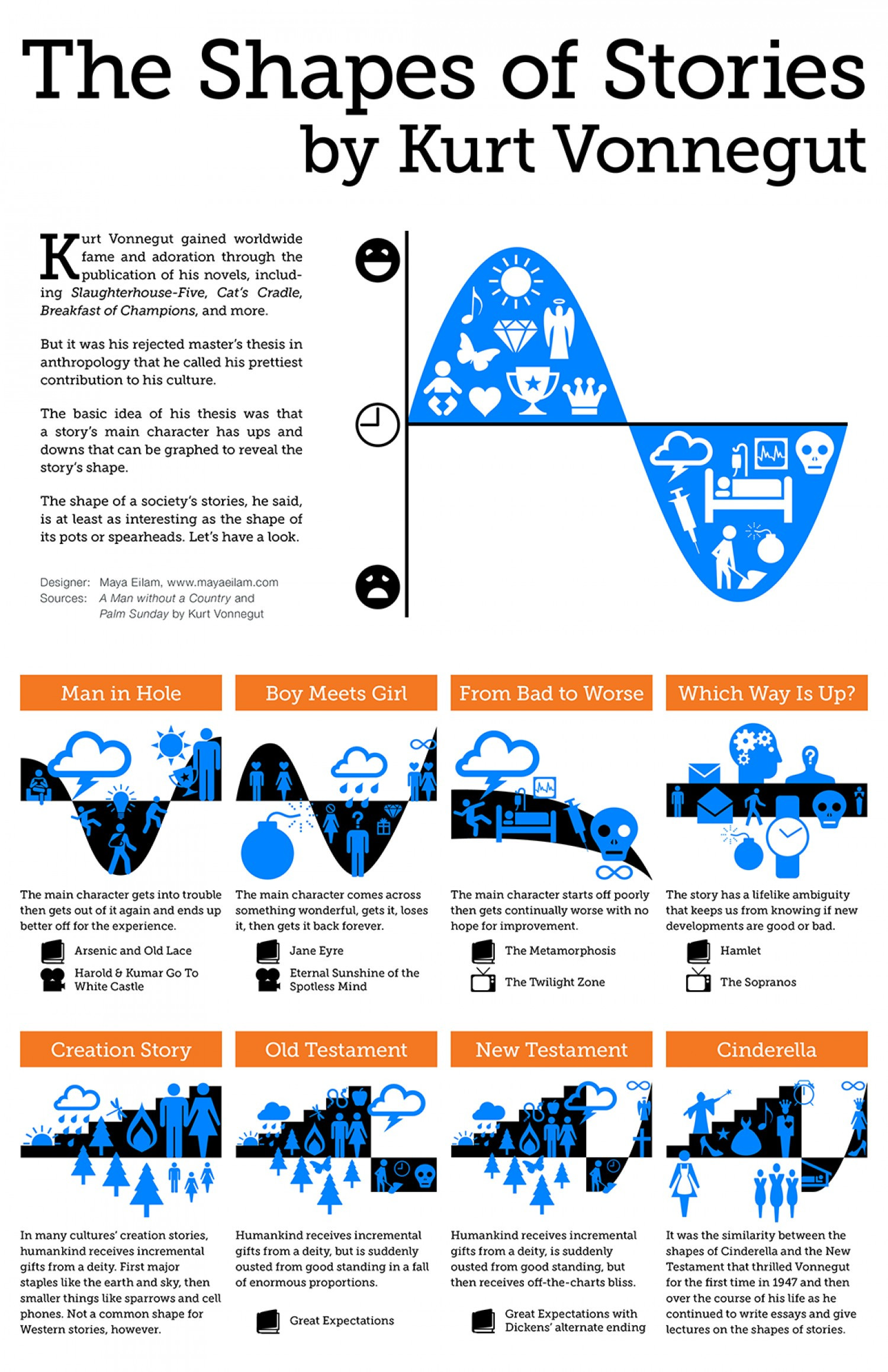 Over time, with better access to AI, and with the spread of Project Gutenburg, a lot of literature (2,000 stories) was put to test by a bunch of researchers from the University of Vermont and the University of Adelaide.

It was no surprise to discover that the said story arcs did exist. The number varies between 6 and 8, but it was interesting to see that there were indeed a few, limited, easily recognizable arcs. More details emerge here especially when “...the AI found that one-fifth of all the works it analyzed were Rags-to-Riches stories. It determined that this arc was far less popular with readers than “Oedipus,” “Man in a Hole,” and “Cinderella.”

What is so reassuring about the arcs is that, based on the experience, the arc tells the storytellers how to proceed. If you use a story, the reader is naturally drawn into it. (Thus you ALWAYS need to choose a good one!) The reader flips the page, expects a turn of events and tries to predict how it will end. This is the level of engagement that comes naturally with good storytelling.

An engaged reader is the kind of reader you wish reads your SOP.

When you begin to work on your SOP, try to identify with one of the story arcs. Choose a strong one to work with. It is the story itself of your SOP that makes it memorable. Very few readers can engage with an itemised list of achievements. Try not to simply list out everything. While writing an SOP, it makes sense to give a context, weave that list of achievements and characteristics into a cohesive story with a curve.

Given that we have at hand, a list of curves to choose from, one would usually choose a strong arc. For our SOP we choose something where our character emerges victorious.

Amongst the most “usable” arcs are Rags to Riches and Cinderella. But the most popular with readers has always been Man in the Hole. While the curve is generally upwards in all three arcs, the focus in the last one especially stays on how the main character overcomes his challenges. The reader is ROOTING for this character and wants him to win. More on that here!

In one of our SOP’s, a student started off by trying for admission, but couldn’t follow it up because of financial challenges. Back at square one, he worked hard, and using unconventional methods (bitcoin mining) bounced back. He then applied for the course of his choice. His SOP was a perfect example of “Man in a Hole” or Problem Solving. It portrayed him in a tough spot. He highlighted the skills he used to come out of the “hole”. He established that the skills he developed were precisely those that were needed, those that set him apart, for the chosen path. The rest of the SOP did have a list of his achievements, skills, and qualifications, but it is the STORY that sticks with the reader.

Another girl did not seemingly have much of a story to work with. Yet she successfully pinpointed a hobby of hers, a love of fragrance, and used it to her advantage. She turned it into a Rise story, where she leveraged her hobby, along with internships in relevant fields, to link it with the profession of her choice, using the chosen course as a stepping stone. Where, seemingly, there was no direction, a story gave her direction.

The trouble with the stories is that you have to maintain a balance. It cannot have too many “plotlines”. The focus should remain clear throughout. There must be an aim in sight at all times, or you’re at risk of having something with all fluff and no aim. you must remember that storytelling is but a tool to bring your SOP to life.

In the end, every person is a story. It is up to us to introspect a little and discover the one about us that we want to tell.  The magic that is woven by the master storytellers, in all our most loved movies, books, is all about people, and the way their lives and stories transform. Even in the terribly popular Game of Thrones, it was the Story, eventually, that won the throne!